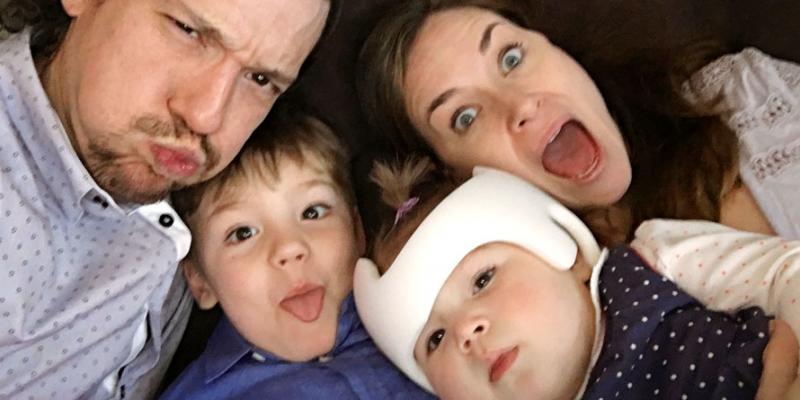 This is a story about a little girl and the people who love her. Her name is Adelaide and she is 3 years old. Adelaide was named, in part, for both her grandmother on her father’s side and a great-grandmother on her mother’s. She has a big brother, Jackson, who is 6. And when Adelaide has seizures, Jackson has been known to sing her songs and remind her: Breathe, baby sister, breathe.

Adelaide started having seizures at just 7 months old, and two months later was diagnosed with a rare seizure disorder. Her parents, Kelly and Miguel Cervantes, are Adelaide’s champions—and thanks to Miguel’s lead role as Alexander Hamilton in the wildly popular musical, they have also found themselves with a platform for raising epilepsy awareness.

“The hand we were dealt is pretty difficult,” says Miguel, referring to Adelaide’s health. Three years after diagnosis, her seizures are still not under control and she doesn’t respond well to current medications. “But the ace up our sleeve is Hamilton,” Miguel continues. “We use the one to help with the other.”
Kelly and Miguel knew almost immediately after Adelaide was born that her development wasn’t progressing as Jackson’s had—as a neurotypical child’s would. “I remember thinking, she’s not doing what she’s supposed to be doing,” says Miguel. “I remember watching this baby not doing things.” Then came the seizures, and absorbing the reality of the diagnosis.

“When you have a disabled child, you don’t get to hit those typical developmental milestones,” says Kelly. “It can be a very alienating feeling.” Accordingly, as Kelly writes about in her online blog, she and Miguel adopted the idea of “inch-stones.” “It’s noticing: She held on to my hand today, and she didn’t do that yesterday; or her seizure wasn’t quite as long today as it was yesterday,” says Kelly. “It’s about finding the smallest pieces of progress.”

Relocating from New York to Chicago allowed Kelly and Miguel to connect with and become advocates for Citizens United for Research in Epilepsy (CURE), a Chicago-based organization that focuses on finding a cure for epilepsy through patient-focused research. “Miguel being cast in this great show gave us an opportunity we just couldn’t waste,” says Kelly, who now serves on the board for CURE.

Subsequently, Miguel and Kelly started the #MyShotAtEpilepsy Challenge—inpired by the song “My Shot” from Hamilton—to promote awareness and funds for epilepsy research. The interactive campaign asks contributors to take a photo in the iconic “My Shot” pose, donate to CURE, and post the image on social media using the campaign hashtag to inspire others to join. Since Adelaide’s diagnosis, Miguel and Kelly have raised over $250,000 for epilepsy research. “Kelly and Miguel are an inspiration to all of us,” says Susan Axelrod, founder of CURE. “Despite their heartache and struggles, they never stop advocating for our shared cause. They represent our future leaders and warriors in this fight.”

But Miguel and Kelly aren’t doing it alone. Over the years, Miguel has found a second family in the cast and crew of Hamilton. “When you’re going through a difficult time in your personal life, it’s comforting to go to your work family and feel the support,” he says. “It speaks to the people we are surrounded by.”
Through their advocacy, through the day-to-day of raising their kids, through inch-stone by inch-stone, and through seven shows a week, Miguel and Kelly are telling their story—and Adelaide’s story. “There’s a deeper meaning of what Hamilton is for us,” says Miguel. “It’s this amazing show that we are a part of, but the bigger purpose is that we are telling a story that needs to be told. Hamilton has afforded us the platform to do that.”