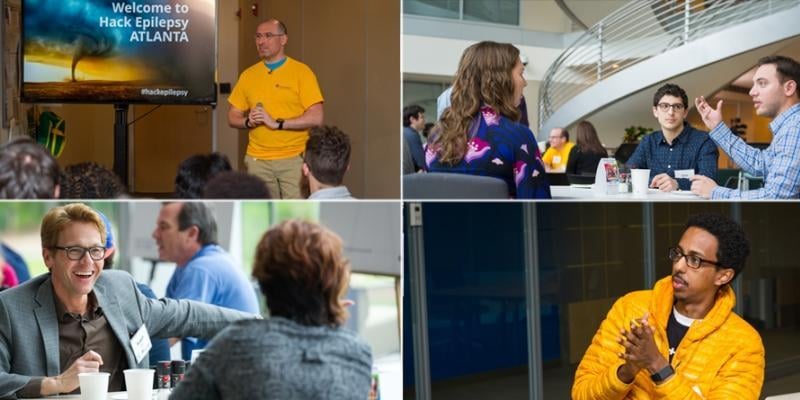 The first-ever Hack Epilepsy weekend, sponsored by UCB, brought more than 100 participants to sites on both sides of the Atlantic to brainstorm ways to improve digital tools for people living with epilepsy. The April event, hosted simultaneously in Brussels and Atlanta, attracted tech enthusiasts from all disciplines: healthcare providers, patients, developers, designers, information-technology experts and entrepreneurs. They all shared a single goal—to design practical, digital tool prototypes, such as apps, that could benefit people with epilepsy. Winning teams were named at each site (first, second and third places) and received prizes totaling $11,500, to be divided among the team members.

Participants had the freedom to design and develop their own ideas, with four key assignments: create a digital communications tool that helps people talk more openly about their epilepsy; create a tool that advises epilepsy patients on how to better manage seizures and avoid triggers; create an educational tool for patients who have been recently diagnosed and need actionable information; and create a tool for patients to navigate their way toward resources and support.

“Epilepsy wreaks havoc on lives,” says Oren Eisenberg, who works at an advertising agency in Princeton, New Jersey. His team won second prize in the Atlanta hackathon for Recover Epilepsy, a mobile app that addresses acute post-seizure recovery. “I am passionate about finding strategies that disrupt how we think about treatment and that help empower patients to move beyond their conditions.”