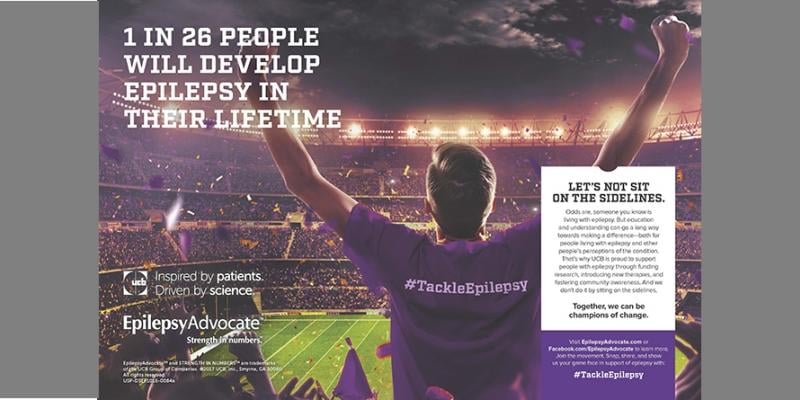 To help raise awareness and reduce the stigma of epilepsy, UCB and EpilepsyAdvocate are launching the #TackleEpilepsy social media campaign leading up to the Big Game on February 5.  In keeping with this effort, UCB will feature an ad in the Official 2017 Super Bowl Game Program and has partnered with Coach Jerry Kill and the Epilepsy Foundation to spread the message.

The year 2000 brought a new millennium, and for college football coach Jerry Kill, it was a year that would change his life forever. One of the most respected names in college football, Kill has coached at the collegiate level for more than 20 years, rising all the way to the Big 10 where he was named Coach of the Year in 2014 as the head coach of the University of Minnesota Golden Gophers.

But the coaching success is only part of Kill's story; his battle with epilepsy dates back to the night in 2000 when he experienced his first seizure. While he wouldn't be officially diagnosed for five years, the year marked the beginning of Kill's life with epilepsy.

Today, Coach Kill is a passionate advocate for epilepsy, and even with the demands of his new position as offensive coordinator at Rutgers University, he devotes much of his time to supporting those living with epilepsy and raising awareness of the disease.  In 2016, he was presented with the Hero of Epilepsy Award from the Epilepsy Foundation. Kill frequently speaks at conferences, founded the Chasing Dreams Epilepsy Fund, and, most recently, has teamed up with UCB and EpilepsyAdvocate on the social media campaign #TackleEpilepsy to help raise awareness of epilepsy during the football post season.  Approximately one in 26 people will be diagnosed with epilepsy in their lifetime.

Today, Kill is able to continue to coach the game he loves and focus on staying healthy, managing his epilepsy, and raising awareness.

That’s why he’s partnering with UCB and EpilepsyAdvocate to support the #TackleEpilepsy campaign, which invites people to

2.) upload the photo to their Facebook page using the hashtag #TackleEpilepsy, and

UCB will donate $26,000 to the Epilepsy Foundation in honor of #TackleEpilepsy participation. This represents the one in 26 people who will be diagnosed with epilepsy in their lifetime.