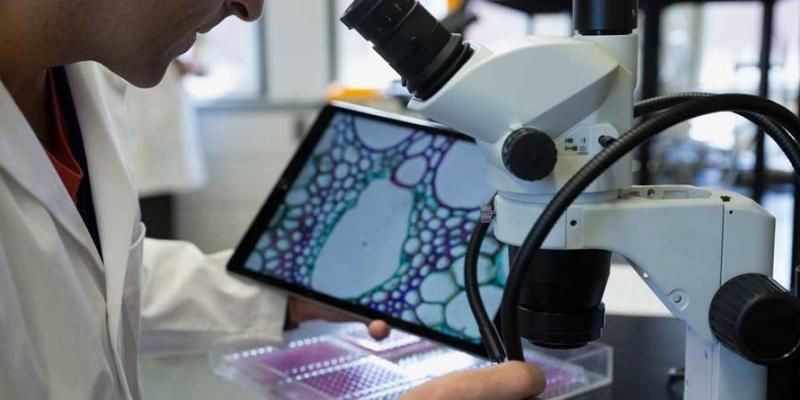 Though nanotechnology may sound complicated, it’s actually a pretty simple concept. “Nanotechnology is a broad, catch-all term for technologies that are anywhere from one to one hundred nanometers in size,” says bioengineer Brian Bender, Ph.D., co-founder of Intake, a diet tracking company that uses nanotechnology for disease prevention.

According to Bender, the dramatic fall in prices and improvements in processing techniques have enabled the widespread use of nanotechnology in the medical industry. “The average patient interacts with nanotechnologies, but they may not be aware of it,” says Bender. “Tools, diagnostics, some drugs—they all have nanotechnology embedded within them.”

When it comes to disease detection, however, nanotechnology is particularly instrumental in biosensor-based diagnostics. For example, some sensors work by using electrodes that interact with biofluids like blood or urine. The electrode materials are coated with conductive nanomaterials such as metallic nanoparticles, carbon nanotubes or other more complex structures.

“These nanomaterials have very high surface areas and are highly conductive, enhancing the signal response from the molecular interactions at the electrodes they cover,” says Bender. “This is useful because some molecules you are looking for that correlate with health and disease, known as biomarkers, can exist in very small concentrations, often during the early phase of an illness. These nanomaterials can decrease the limit of detection and improve diagnostic capabilities and accuracy.” Such is the case in the work of researchers at Worcester Polytechnic Institute and the University of Michigan, who are using antibodies attached to carbon nanotubes to detect cancer cells in the bloodstream.

Nanotechnologies are also extensively used in disease treatment as drug delivery vehicles. “Drug delivery vehicles can help drugs target their specific tissue of interest or help control drug release kinetics,” says Bender. For example, some drugs are encased in nanostructures that help them stay in circulation longer and get released slowly over time. “Others may delay their release entirely for a set period of time, only to be released as a larger dose later,” says Bender. In addition, some drugs are packaged in smaller drug delivery vehicles, which can target specific tissues simply because of their small size.

Without nanotechnologies, researchers wouldn’t be able to detect, monitor or treat chronic illnesses as effectively as they can now. The goal is to continue finding new solutions, new materials and new tools to help patients live longer, healthier lives.