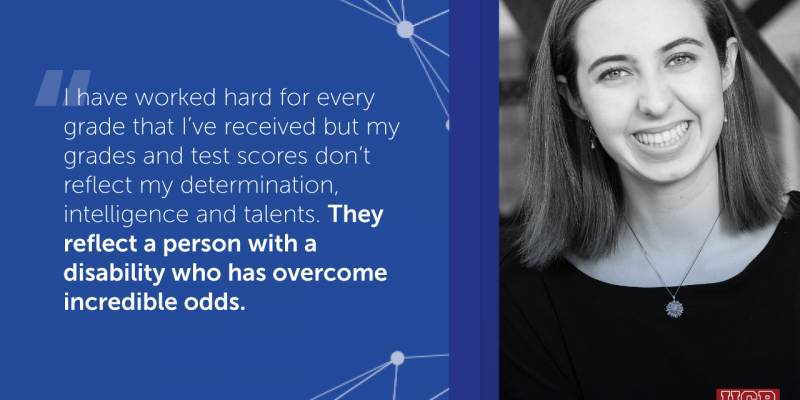 At UCB, we are committed to breaking the barriers to better care for people living with epilepsy. One way we do this is by helping patients and their families receive the support they need to live their best lives possible. Since 2005, UCB has offered financial support through our annual UCB Family Epilepsy Scholarship and have awarded more than 500 scholarships to deserving recipients. Just like every other year since the scholarship’s inception, we’ve been overwhelmed by the impressive list of awardees who continue to strive towards their goals and live with the complexity of a disease like epilepsy. Read more about five of our scholarship winners and how they are pursuing their passions while living with epilepsy.

In addition to the Joe D’Souza memorial scholarship created in the memory of UCB’s former global director, UCB continues to award the Epilepsy Leader Scholarships in honor of the late Dr. Sandra Helmers and the late Dr. John M. Pellock, who were trailblazers in epilepsy research and treatment. This award recognizes individuals advocating for others, positively contributing to the epilepsy community, and embodying a persevering spirit. This year’s Epilepsy Leader Scholarships were awarded to Julia Patterson of Round Top, Texas and Laine Richards of Grand Rapids, Michigan

Julia Patterson – Round Top, Texas – “Diagnosed with epilepsy, I faced a ten-year-long struggle in which I was presented new challenges and opportunities,” said Julia Patterson. Julia recently represented her high school senior class as valedictorian and was involved in a variety of extracurricular activities including golf and serving as student council president. Her journey with epilepsy has led her to using her voice to advocate for change, as she spoke to the Texas House and Senate advocating for alternative treatment options for all seizure disorders. Julia plans to attend Texas A&M University in the fall.

Laine Richards – East Grand Rapids, Michigan - Despite living with daily seizures, Laine Richards has been an influential advocate for the Epilepsy Foundation of Michigan personally raising more than $165,000 since she became involved with the organization. Laine is very active with the Foundation and has also represented the state of Michigan in the Epilepsy Foundation of America's “Teens Speak Up” program where she lobbied on Capitol Hill annually to advocate for those living with epilepsy. She also was the driving force behind the 2019 East Grand Rapids' Hearts of Gold campaign, a community-based group of students and parents who work every year to raise funds and awareness for a non-profit organization. In 2019, Laine helped raise almost $220,000 with Hearts of Gold for the Epilepsy Foundation of Michigan. Laine is attending Grand Valley State University and will major in special education.

Maddy Grady – St. Paul, Minnesota – Despite the many challenges that Maddy Grady has faced living with epilepsy, she has remained resilient in making the most of her life by pursuing her passions. Since the age of six, Maddy has been performing in the Circus, and is expounding on her talents in the Arts industry at Northwestern University where she is studying theatre and psychology. “My education has remained one of the most important things to me,” says Maddy, “and I will never let my seizures get in the way of it.”

Breanna Jaffe – Indianapolis, Indiana – Breanna Jaffe is “fireproof” – and she wrote a song about it to describe her journey with epilepsy. Her journey with epilepsy began in 2010, and since then Breanna has become an advocate for others living with epilepsy providing encouragement through her singing and songwriting. Breanna has performed at local charity events in Indianapolis and Nashville, TN and hosted an open mic event called “Sing for Seizures” to raise money for the Epilepsy Foundation of America. “I plan to continue my advocacy efforts for all others like me affected and will not stop until we find a cure,” says Breanna.

Joseph Quintana – Highlands Ranch, Colorado -   Since the age of nine, Joseph “Joey” Quintana has faced adversities during his journey with living with epilepsy. These challenged has led Joey to pursue a path of advocating for change. Joey is very active in the Epilepsy Foundation of Colorado where has advocated for epilepsy research funding at the Colorado state capitol in 2018, and Capitol Hill in 2019. He served as a mentor to kids who have been recently diagnosed with epilepsy and is currently working on the Seizure Safe School Act. “As a result of my personal resilience, I turned a major struggle in my life into my biggest blessing…I can say that I am blessed to have gone through that adversity, as I now have a passion to fight for change and leave a lasting impact on the world,” says Joey. Joey plans to continue his passion for helping others by studying public policy at the University of Denver in the Fall.

UCB is proud to continue our annual commitment of providing scholarships to students living with epilepsy enabling them to pursue their passions and live at their ideal.